With one drug to shut down its progression and another to undo its damage, plus a worldwide effort stalking the origins of multiple sclerosis, MS doesn’t stand a chance.

Alexandra Solal’s 47th year was remarkable by any measure: She climbed Mount Kilimanjaro, ran two half-marathons, completed a half-Ironman, and started a CrossFit gym habit before work with a friend. It was also the year she woke up half paralyzed. Determined not to alarm her son, she commando-crawled to her closet, dressed on the floor, and called her gym buddy to take him to school. “When my friend pulled in, she saw me propping myself up between our two cars and started to cry,” recalls Solal. “That’s when I knew it was bad.”

Solal’s story is more dramatic than most. Multiple sclerosis (MS) usually sets in with neurological symptoms that evolve over a few hours or days – eye pain, vision loss, double vision; numbness or tingling in the hands or feet; leg weakness; loss of balance. But the gradual onset belies the ferocity of the immune system’s attack on the myelin protecting our nerves. Just as the insulation on a power cord ensures electricity’s safe passage, myelin safeguards the passage of signals from our brain to the rest of our body. If myelin degrades, so does the messaging, until it breaks down entirely.

Stopping MS in Its Tracks
Yet, like her disease’s onset in 2013, Solal’s trajectory with MS will be dramatically different than that of patients diagnosed a generation ago.

Her neurologist, Stephen Hauser, MD, just announced a new MS drug that’s far more effective than high-dose interferon beta – a standard treatment – at reducing brain inflammation and lesions. Hauser, chair of neurology and Robert A. Fishman Distinguished Professor in Neurology, led the trial, which was sponsored by Hoffman-La Roche and conducted at over 200 centers worldwide in patients with the disease’s most common form, relapsing-remitting MS. 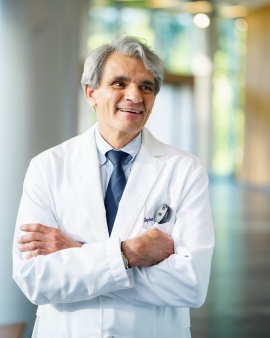 “The results were beyond spectacular,” says Hauser, who has been named inaugural director of the new UCSF Weill Institute for Neurosciences. “This therapy essentially stops the inflammatory relapsing form of MS in its tracks and appears to do so safely.” Hauser spent decades collaborating across institutions and industry and bucking convention to lay the groundwork for ocrelizumab.

More good news followed. There’s been no therapy for the primary progressive form of the disease (PPMS), which affects 10 to 15 percent of the 400,000 Americans with MS. But a related trial showed that ocrelizumab is 24 percent more effective than a placebo in slowing PPMS’s progression and staving off brain lesions and degeneration.

The next steps will be to develop evidence-based rules for using this well-tolerated and highly effective drug. Currently, physicians delay prescribing the most effective therapies, due to their toxicity. “We are optimistic that with aggressive therapy that can be given safely at the beginning of the disease, the long-term outcomes, which are measured in decades, will be far superior to what they are today,” says Hauser. “These results should allow us to ask if shutting down brain inflammation at a very early stage in the disease might prevent late progressive MS altogether.”