Exercises like yoga and aquatic programs can help ease some symptoms of multiple sclerosis (MS), especially fatigue, depression and paresthesia, researchers report in a study published in the journal Medicine & Science in Sports & Exercise, and titled “Exercising Impacts on Fatigue, Depression, and Paresthesia in Female Patients with Multiple Sclerosis.”
The incidence of depression in MS patients is 40 percent to 50 percent higher than in the general population. Two-thirds of these patients are also plagued by excessive fatigue, severely reducing their physical activity, and up to 87 percent report being troubled by paresthesia, or numbness and tingling, especially in the extremities.
Standard treatment for MS consists of immune modulatory medication, though there is growing evidence from published studies that exercising programs have a positive influence on fatigue and on psychological symptoms such as depression.
Researchers from the University of Basel and the Psychiatric University Clinics Basel, along with colleagues in Kermanshah, Iran, randomly assigned 54 women with MS to one of the following programs: yoga, aquatic exercise, or no exercise at all (the control group). At baseline and at study completion, all MS patients completed a questionnaire about their symptoms, and all  continued with their existing therapy, including any medication to control the immune system.
READ MORE

New News for Acthar Gel (aka: ACTH ) - an Effective Treatment for MS Relapses

Clinical results presented at the recent Academy of Managed Care Pharmacy (AMCP)‘s 2016 annual meeting in San Francisco showed that the use of H.P. Acthar Gel during multiple sclerosis (MS) relapses is associated with beneficial outcomes. The gel, according to its producer, is also available at a lower price than other frequently used drugs.
H.P. Acthar Gel, manufactured by Mallinckrodt Pharmaceuticals, has been used since the late 1970s for acute exacerbations of MS symptoms. The gel, which is injected to enable extended release of the drug, contains a highly purified preparation of adrenocorticotropic hormone (ACTH). ACTH triggers the body’s own corticosteroids — cortisol, corticosterone, and aldosterone — and might also affect B- and T-cells.
The drug is often prescribed for patients experiencing severe side effects of high-dose corticosteroids, or who have not responded well to corticosteroid treatment.
Continue Reading

Zinbryta (daclizumab HYP) is favored for approval in Europe


he Committee for Medicinal Products for Human Use (CHMP) of the European Medicines Agency (EMA) recently recommended marketing authorization to Zinbryta (daclizumab) for the treatment of patients with relapsing multiple sclerosis (RMS).
Zinbryta (daclizumab HYP) is a humanized monoclonal antibody that is injected every four weeks, and being developed by Biogen and AbbVie. It binds to the receptor subunit CD25 of interleukin-2 (IL-2), which is highly expressed in immune T-cells. These immune cells are overly expressed in MS, and Zinbryta is thought to deplete the activated T-cells and increase other cells that regulate the immune response (NK cells). The compound is currently under regulatory review in the United States, Canada, Australia, and Switzerland.
“For people with relapsing forms of MS (RMS) and active disease, ZINBRYTA has the potential to offer robust efficacy, a manageable safety profile through patient monitoring, and once-monthly subcutaneous dosing,” said Alfred Sandrock, MD, PhD, executive vice president and chief medical officer at Biogen, in a recent press release. “ZINBRYTA may offer another option for people with multiple sclerosis (MS) with its targeted mechanism of action (MOA) which did not cause broad and prolonged immune cell depletion.”
The European Commission (EC) will now review the CHMP positive opinion, and make its decision in the coming months.

With a unique delivery method, alemtuzumab (Lemtrada) has proven to be an effective treatment option for multiple sclerosis. While careful monitoring is required, new data has shown benefits for the right patient population.

It’s important to do a comparison of Lyme disease vs. multiple sclerosis (MS) as the two do have much in common. At the same time, they both have their own unique differences that distinguish one from another.
Lyme disease is caused by a bite from a deer tick or black-legged tick, which transfer Borrelia burgdorferi bacteria. The longer a tick is attached to you, the higher your risk of developing Lyme disease is.
Multiple sclerosis is an autoimmune disorder in which the body’s immune system attacks the myelin, a protective coating around the nerves and spinal cord. As myelin deteriorates, it damages the nerves and spinal cord, thus causing the MS symptoms.
Lyme disease may present itself like multiple sclerosis, but there are distinctive differences, which we will outline to help you decipher between the two. 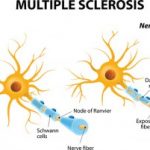 Majority of MS patients are diagnosed between the ages of 20 to 40, but it can develop at any age. There are over 400,000 cases of multiple sclerosis in the U.S., with women accounting for the majority of cases. Each week, there are an additional 200 cases of multiple sclerosis diagnosed in America.
There are roughly 30,000 Lyme disease cases reported annually, but it’s not an accurate reflection of how many cases actually occur, as these are incidences only reported to the Centers for Disease Control and Prevention.
In order to improve data collection on Lyme disease, the CDC has set out two different studies known as Project 1 and Project 2. Project 1 estimated 228,000 cases of Lyme disease through laboratory testing, and Project 2 estimated 329,000 cases of Lyme disease based on claims from medical insurance databases.


The lack of a medication to treat primary-progressive multiple sclerosis (PPMS) is a source of frustration for clinicians and patients. The results of a recent phase 3 study of the drug ocrelizumab may be cause for hope.

An estimated 400,000 Americans have MS, according to the National Multiple Sclerosis Society. Data show approximately 85 percent of individuals diagnosed with MS have relapsing-remitting MS (RRMS) at the time of diagnosis. Inflammation is the hallmark of RRMS, as immune cells launch inflammatory assaults against myelin and nerve fibers. Individuals experience flare-ups of symptoms, followed by periods of remission.
Approximately 15 percent of individuals with MS are initially diagnosed with PPMS. Several factors make PPMS more difficult to diagnose than RRMS, according to Claire Riley, MD, Assistant Professor of Neurology and Director of the Multiple Sclerosis Clinical Care and Research Center at Columbia University. These include fluctuations in the disease course of PPMS that can mask progression, as well as a bias among clinicians toward diagnosing RRMS, which is more treatable than PPMS.
“One factor that makes [treating PPMS] challenging is that we’ve developed a lot of treatments that focus on inflammatory activity,” Dr. Riley says. “While there is some inflammatory activity in people with PPMS, it seems like there are also degenerative changes going on — loss of [whole-brain] volume, loss of neurons. I think these degenerative diseases are much more challenging mechanistically to interfere with. Understanding why particular cells are vulnerable and helping them survive is ... a tough nut to crack.”
Researchers also face methodological hurdles.


The European Medicines Agency said on Friday its experts had endorsed Zinbryta, or daclizumab, for the treatment of relapsing forms of multiple sclerosis (MS), adding a new option to a range of modern MS therapies. London: A once-monthly injection for multiple sclerosis from Biogen and AbbVie has been recommended for approval by European regulators, paving the way for its launch in the coming months.
The European Medicines Agency said on Friday its experts had endorsed Zinbryta, or daclizumab, for the treatment of relapsing forms of multiple sclerosis (MS), adding a new option to a range of modern MS therapies.
The positive opinion will now be referred to the European Commission, which normally grants marketing authorisations for medicines recommended by the agency within a couple of months.
The self-administered, under-the-skin injection is also currently being reviewed by regulators in the United States, Switzerland, Canada and Australia. (Reporting by Ben Hirschler; Editing by Mark Potter) 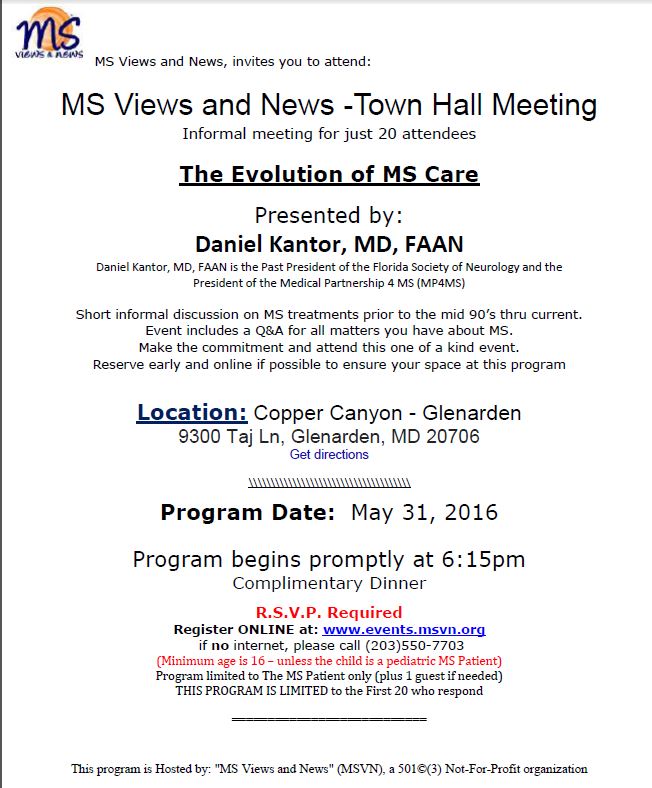 Registration required. To Attend, RSVP using the link showing above

This event has limited seating