Converting the Hemp plant to CBD oil for Wellness

Green Roads Wellness is committed to improving the lives of its patients and their families.  Standing behind the purpose of inspiring hope and restoring happiness, Green Roads Wellness produces the highest quality, pharmacist formulated CBD products to pave the way for a healthier, happier life.
There’s Always an Alternative.


1500MG- CBD OIL
1500MG medical tincture is a purely sublingual oil with a full spectrum hemp oil base, pharmaceutical-grade cannabidiol, and reinfused with terpenes. The combination of pure CBD isolate, full spectrum CBD oil, and terpenoids create a powerful Entourage Effect where the cannabinoids work together synergistically producing a more physical effect in the body. This is our most powerful formula and the source of countless positive testimonials among users and their family members.      (Other MG Dosages are available as well)

300MG - PAIN CREAM
Our natural pain cream offers a soothing and effective delivery system. A hemp based topical formulated with a pharmaceutical grade cream base, Menthol, Essential Oils and 300MG of cannabidiol making this the most powerful CBD pain topical on the market.

150MG - SKIN RELIEF
Cannabis is a known anti-inflammatory, with antioxidant and anti-aging properties. Our natural skin relief topical offers a soothing and effective delivery system.  It is a proprietary hemp based topical formulated with grapeseed oil, vitamin E oil, essential oils, aloe vera, and cannabidiol.  This product is designed for direct application to affected areas on the skin.

To further review or to request information, click here 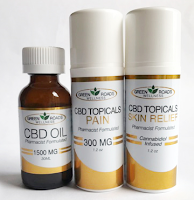 'MS Views and News' DOES NOT endorse any products or services found on this blog. It is up to you to seek advice from your healthcare provider.

.
MS Views and News is MAKING an IMPACT on those affected by Multiple Sclerosis

Shannon Aymes, MD
April 19, 2017
dimethyl fumarate (DMF)  (aka: Tecfidera)
Post hoc data analysis of the DEFINE and CONFIRM trials showed that a higher percentage of patients with relapsing-remitting multiple sclerosis (RRMS) achieved no evidence of disease activity (NEDA) with delayed-release dimethyl fumarate (DMF) compared with placebo. The results were published in the European Journal of Neurology.1
NEDA is a relatively new composite outcome that is being used more often to measure therapeutic response in multiple sclerosis. NEDA is comprised of 3 factors: no clinical relapse, no disability progression measured by the Expanded Disability Status Scale (EDSS) for 12 weeks, and no evidence of disease activity on magnetic resonance imaging (MRI).
Continue Reading


A physical scaffold that allows lab-grown brain cells to grow in a three-dimensional manner is giving scientists a whole new way of studying the regeneration of myelin, nerve coatings whose damage is at the heart of multiple sclerosis.
The scaffold is allowing researchers to test large numbers of compounds for their capacity to trigger remyelination. This could lead to an acceleration of research into regenerative drugs for MS

“The aligned Mimetix scaffold fibres from AMSBIO have been an invaluable tool, allowing us to answer fundamental questions regarding how oligodendrocytes form central nervous system (CNS) myelin sheaths,” Marie Bechler, a senior researcher in the Constant laboratory at the MRC Centre for Regenerative Medicine in Scotland, said in a press release.
The three-dimensional orientation of cells in the central nervous system determines how cells grow and behave. Earlier methods of growing brain cells in a lab dish have been unable to mirror everything that goes on in a living human.
MRC Centre researchers are using the three-dimensional fiber technology that AMSBIO developed to study oligodendrocyte cells and myelin regeneration. Oligodendrocytes are cells that wrap their appendages around nerve cells to form myelin.
Read more

MS Views and News is MAKING an IMPACT on those affected by Multiple Sclerosis
Posted by Stuart at April 17, 2017 No comments: Links to this post

Firefighter with Relapsing MS on Ocrevus: ‘I Have Really Good Days and I Have Bad Days’

Texas firefighter Wayne Donovan is among the estimated 250,000 to 350,000 Americans with multiple sclerosis (MS). He enrolled in a clinical trial testing Ocrevus (ocrelizumab), which the  U.S. Food and Drug Administration recently approved as the first therapy for both relapsing and primary progressive forms of MS.
Donovan was diagnosed in 2011 at the age of 39, after he started feeling numbness in his hand and foot and saw a orthopedist, thinking he might have pinched a nerve. The orthopedist, however, recognized that it could be something more serious and referred him to neurologist Dr. Edward Fox at Central Texas Neurology Consultants in suburban Austin.
Fox diagnosed Donovan with relapsing MS — an unpredictable form of the disease.
“By the time I saw Dr. Fox, about three-quarters of my body was either numb or tingling, or had pins and needles,” Donovan said in a news release. “As a firefighter, I have to be strong and present in tough situation. I didn’t know what this meant for me and my family.”
The ultimate cause of MS is damage to myelin, nerve fibers and neurons in the brain and spinal cord, which together make up the central nervous system, causing inflammation and other debilitating symptoms. Relapsing MS is characterized by episodes of new or worsening signs or relapses, followed by periods of recovery.
Ocrevus targets immune B-cells that express a protein called CD20 on their surface, giving the drug an immunosuppressive function. The medication, developed by Genentech — a unit of the Roche Group — aims to reduce the immune system’s attacks on myelinated neurons, the main trigger of the disease.
Fox knew about a clinical trial that was investigating Ocrevus and suggested that Donovan enroll. After considering the pros and cons, Donovan enrolled and started receiving Ocrevus soon after. In the trial, the drug was administered every six months as an intravenous infusion.
Continue Reading

MS Views and News is MAKING an IMPACT on those affected by Multiple Sclerosis
Posted by Stuart at April 17, 2017 No comments: Links to this post