People with Multiple Sclerosis (MS) feel more than twice as much withheld anger as the general population and this could have an adverse effect on their relationships and health, according to a study published in the December issue of the European Journal of Neurology.

Italian researchers assessed 195 patients with MS, using a range of scales that measure anger, depression and anxiety, and then compared them with the general population.

They were surprised by the results, which showed that while patients experienced almost twice the normal level of withheld anger and exerted low levels of control on their anger, their expressed anger levels were similar to the general population.

This, together with the fact that the elevated withheld anger levels were not related to the severity of the patients' MS, suggests that these inconsistent changes were caused by nervous system damage, rather than an emotional reaction to the stress of the disease.

"We believe that the higher levels of withheld anger shown by the study subjects is due to demyelination, loss of the substance in the white matterthat insulates the nerve endings and helps people receive and interpret messages from the brain" explains lead researcher Dr Ugo Nocentini from the IRCCS S Lucia Foundation in Rome.

"The way we process anger is controlled by complex interconnections between the subcortical and cortical systems, notably the amygdale and basal ganglia and the medial prefrontal cortex. We believe that the demyelination process that causes the root symptoms of MS also disrupts the pathways that control how we deal with withheld anger."

Farmington, CT – Current research suggests that a common oral bacterium may exacerbate autoimmune disease. The related report by Nichols et al, "Unique Lipids from a Common Human Bacterium Represent a New Class of TLR2 Ligands Capable of Enhancing Autoimmunity," appears in the December 2009 issue of The American Journal of Pathology.

Porphyromas gingivalis, a common oral bacterium in humans, produces a unique type of lipid, phosphorylated dihydroceramides (DHCs), which enhance inflammatory responses. These lipids are also likely produced by bacteria found in other parts of the body including the gastrointestinal tract. To determine if these lipids accentuate immune-mediated damage in autoimmune disease, researchers led by Robert B. Clark and Frank C. Nichols of the University of Connecticut Health Center administered phosphorylated DHCs in a mouse model of MS. The severity of disease was significantly enhanced by the addition of these lipids in a manner that was dependent on activation of the immune system. These data suggest that phosphorylated DHCs from bacteria commonly found in humans may trigger or increase the severity of autoimmune diseases such as multiple sclerosis.

The authors state that "while it is clear that the immune system in most individuals has the potential to attack self-tissues, the "tipping" factors that initiate and propagate autoimmune diseases such as multiple sclerosis in only a subset of individuals remain unknown. Overall, [their] results represent the first description that phosphorylated DHCs derived from common human bacteria are capable of enhancing autoimmune disease." Thus, these lipids may function as "tipping" factors, playing a previously unrecognized role in initiating or exacerbating human autoimmune diseases. In future studies, Dr. Clark and colleagues plan to characterize the effects of phosphorylated DHCs on specific cells of the immune system and to identify how and where these lipids are deposited in tissues throughout the body. In addition to the role of these lipids in triggering and worsening MS, the authors believe that phosphorylated DHCs may have the potential to serve both as new markers of MS disease activity and as new targets for therapeutic intervention. 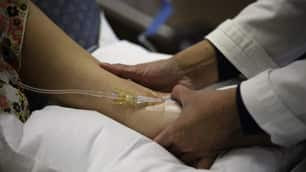 The Multiple Sclerosis Society of Canada will finance some research into an experimental Italian treatment but urges patients not to stop treatment until more is known about the procedure. (M. Spencer Green/Associated Press)

The Multiple Sclerosis Society of Canada will be asking Canadian scientists to propose their own research into a procedure that has ignited the hopes of patients in Europe and North America.

The procedure is known as chronic cerebro spinal venous insufficiency, or CCSVI, and involves removing a blockage in the veins that carry blood to and from the brain.

MS Views and News provides information to keep those affected by Multiple Sclerosis informed and up-to-date. Please register at our website to begin receiving our weekly MS Related e-newsletter.

Keep in mind, all to do with CCVI is Hypothetical - Stuart

"As President and CEO of the MS Society, I am aware of the tremendous interest across Canada and around the world caused by the recent news coverage of the CCSVI study. Indeed I share your excitement and hope in the preliminary findings of this study. I also celebrate and respect the integrity of our research funding programs which will continue to ensure that the very best projects are selected and supported. For more detail on this process please link here."

Chronic cerebrospinal venous insufficiency (CCSVI) describes a hypothetical disruption of blood flow in which the venous system is not able to efficiently remove blood from the central nervous system resulting in increased pressure in the veins of the brain and spinal cord which in turn results in damage to these areas. Recent reports have revived the idea of an association between inadequate venous drainage and multiple sclerosis.

The MS Society of Canada is aware of recent reports on the subject of CCSVI that may open up new avenues of research including new therapies for MS. While the early data shows promise, it is important to acknowledge that the concepts surrounding CCSVI and multiple sclerosis are still relatively new and requires replication and validation in much larger, well-designed scientific studies before they can be accepted as established.

The MS Society of Canada is closely monitoring all research related to CCSVI and will post new information on www.mssociety.ca.

The research project is supported by Fondazione HILARESCERE, chaired by Professor Fabio Roversi-Monaco.

Set up upon an initiative of Fondazione Cassa di Risparmio in Bologna, Fondazione Hilarescere - as is stated in the deed of formation - aims to support medical and scientific research in the field of diseases of unknown or poorly known etiopathogenesis where the diagnostic and therapeutic standards have little effect on the quality of life of the affected individuals, especially in the field of chronic and degenerative diseases of the nervous and vascular systems with particular reference to multiple sclerosis.
The Foundation also aims to promote and sustain the dissemination of preventive, diagnostic, care and assistance techniques to the subjects suffering from such diseases.

Because of language The video is bit difficult to understand.